Stocks Turn on US Tariffs

Stock markets have turned red on Monday after Donald Trump unexpectedly announced that tariffs on steel and aluminum would be reimposed on Argentina and Brazil.

The announcement came as the President accused both countries of manipulating their currencies to the detriment of US farmers, once again employing the one-size-fits-all approach to trade matters.

I’m not sure many would agree that the movements in those currencies is a case of manipulation but then, Trump has never been particularly concerned about that. Whether his reasoning is justified has always come a distant second to his desire to level the playing field. If anything, the debate simply amplifies his message that he’s fighting for farmers. Win, win!

Trump heads to the UK this week at a very sensitive time for politicians as the public prepares to head to the polls. Trump has never been one to hide his feelings about Brexit and his desire for the UK to have a clean break from the EU, not to mention his opposition to Labour leader Jeremy Corbyn or London Mayor Sadiq Khan. These visits don’t always go to plan though, as per the infamous “everything on the table” response when asked about the NHS while stood next to Theresa May. He may choose to be more careful this week.

Gold has enjoyed a nice rebound as the day has progressed, although even now it’s struggling to break back into positive territory for the session. It’s found some support around $1,440-1,450 over the last few weeks but even this continues to look vulnerable. It would take a move back above $1,480 to change the view on this and even that may be met with some skepticism.

Oil pares losses but not convincing

Oil has pared its earlier gains as the mood has soured but continues to trade higher on the day. The trend has been rising gradually, although the sell-off on Friday was potentially another warning that we may be in overbought territory. It was a strong sell-off under the circumstances and Brent now looks vulnerable around the $60 level. WTI around $55 is interesting, with a break below here potentially marking the end of the run.

Bitcoin heading for another down day

Another reminder today that bitcoin is no safe haven as stocks turned south and the cryptocurrency traded sideways. A third day of losses looks on the cards, although in this space things can change rapidly and in a big way. Bitcoin failed to break back above $8,000 last week and has edged lower since. $7,000 is offering some support for now but the recent trend is not its friend. If it holds, it could be good news for crypto-enthusiasts. 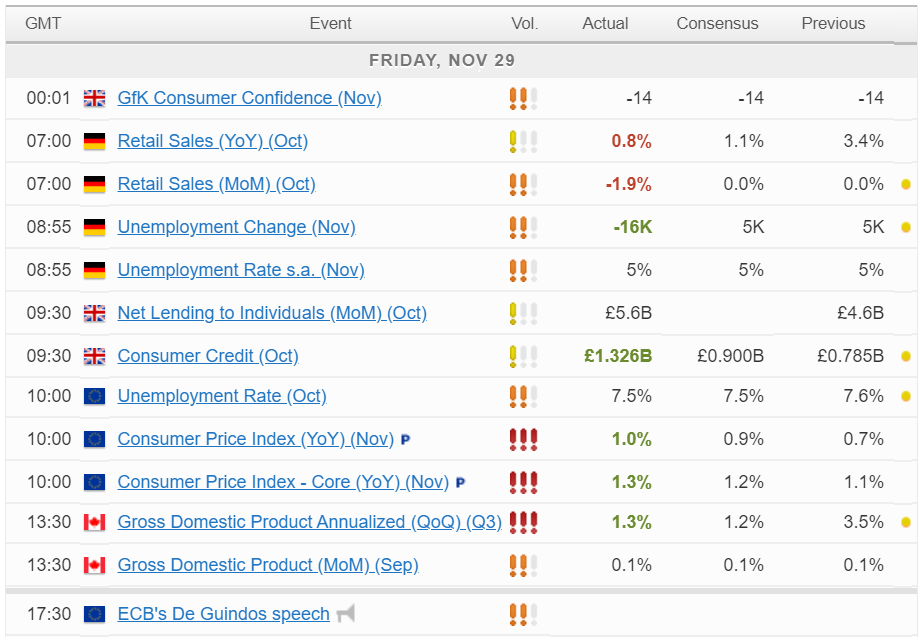